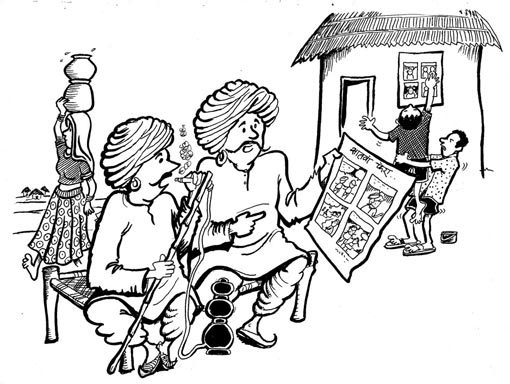 Wallposter Comics is a community development tool that is a part of the grassroots comics movement, World Comics India, that started in the late nineties.  During this time, cartoonists, development journalists and activists came up with the idea to combine their skills and use comics as a communication tool.  Over 1000 of these workshops have been conducted thoughout South Asia, Latin America, Europe, Africa, Central Asia and all throughout different parts of India.  Despite the widespread prominence of the Wallposter Comics project in India, there had not yet been a workshop in Ladakh.  Leh, Ladakh is where I would be spending two months interning and conducting various art workshops with Ladakh Arts and Media Organisation, so I saw this as a perfect opportunity to bring a Wallposter Comics workshop to Ladakh.
The idea of Wallposter Comics is to encourage the often unheard members of society to communicate relevant themes and challenges that they see within their communities.  Wallposter Comics encourages response from others in the community because of the placement of the comics in areas of high foot traffic.  The format of these comics, 4-panel comic strips, as a mode of communication is an effective way to address messages because they are short and concentrated on one theme.  Because these comics are succinct and use illustration to push forward messages, these comics work well in areas of low-literacy rates.  Using walls in the community as a platform for showcasing these comic strips is not only empowering for participants and encourages participants to take ownership, but it also encourages local debate in the society. 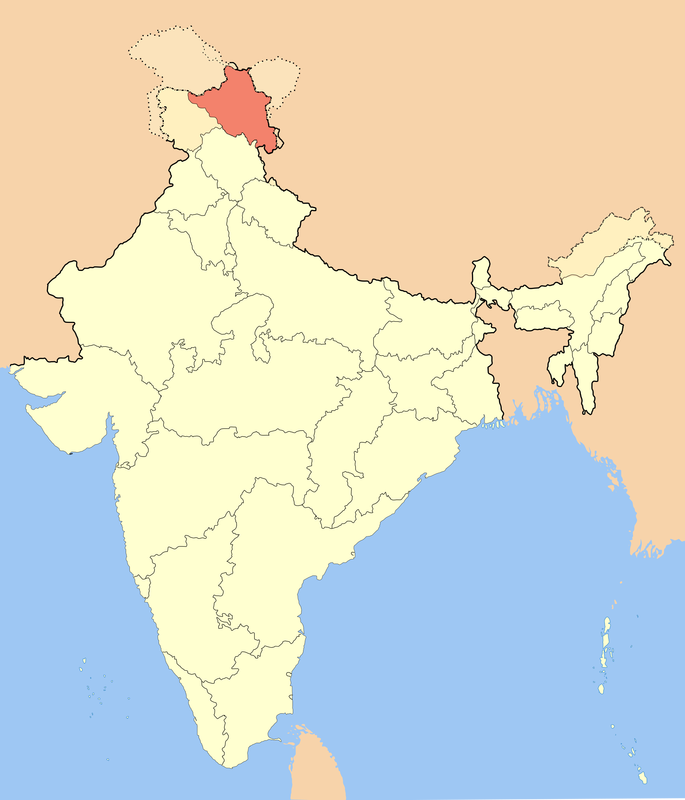 While India is a country full of rich creative heritage, Ladakh, a remote region high in the Himalayan mountains, holds an entirely unique relationship with the arts.  From textiles to wood carvings to detailed Tibetan Buddhist "Thangka" paintings, art is everywhere here.  It is interesting how the environment has changed with modernity pushing its way into the area and as a result merging traditional art practices of Ladakh with contemporary art.  Although tourism has been rising ever since the region became accessible to outsiders in 1976, this outside influence does not appear to be what is moulding the art scene in Ladakh.  From my perspective, the biggest driving factor for change in the Ladakhi art scene is the local youth.

This workshop was conducted at Ladakh Arts and Media Organisation in Karyok, Leh on the dates of July 25th, 27th and 29th.  Ten children from the Leh area took part in the three day development of a story through sequential art, and as a result seven 4-panel comics were created.  Over the course of the three days there were several activities that helped the participants discover how to create four-part stories with underlying messages, and how to bring them alive with comics. One activity involved analyzing an old piece of Indian tribal art, depicting the story that was being told, and then adding dialogue to turn the art piece into a comic strip.  Once the participants determined the stories that they would create themselves, the instructors would float around the room and work individually with participants. By the end of the third day each participant had been involved in the creation of a comic strip with themes ranging from environmental conservation to bicycle safety.
The comics were then photocopied by the instructors and compiled onto a board which was displayed in the main market with a sheet of paper encouraging people to share their thoughts on the project.  The project truly came together on one afternoon when four to five street youth showed up at the board with a bag full of colored pencils.  The children spent 30 to 45 minutes collaborated on filling in all of the comics with colored pencils, giving life to the stories developed by the children in the workshop.  At this point it was clear how the Wallposter Comics project successfully expressed the voice of the many different groups of children in Leh.

So how could I bring this type of workshop back home with me...

Surely there are groups of people in my own community that could benefit from using this form of creativity to better understand the challenges and obstacles that they face on a day-to-day basis.  I figured that I could potentially even do more, or go further, with this type of workshop in Portland because of the city's progressive nature.  Although I felt like the workshop in India was successful because of how inclusive it was for the different demographics of youth in the city, I did encounter resistance and skepticism from multiple locals while the comics were being displayed in the market.  On the contrary, the challenge in bringing this type of workshop to Portland might be that it is highly accepted, and therefore it does not bring as strong of a shock value.  How can I inspire the participants in the new workshop to steer the creative process in a direction that they feel it needs to go, while also ensuring that the outcome is creating a space for constructive local debate in the community?

"Victory is the first school of its kind in the Greater Portland Metro Area to offer a comprehensive educational and therapeutic program to children affected by Autism. Specifically, Victory provides students with a customized academic plan, integrating proven, research-based therapeutic strategies into every learning task." -www.victoryacademy.org

​I chose to reach out to a very unique school located in Wilsonville, Oregon for students between the ages of 3 and 16 years old affected by Autism.  I had heard about this school through several friends who were teachers there and felt strongly about the good work that is being done there.  A good friend of mine at Victory Academy is the art director, which was great being that we had to configure a feasible way to bring this type of creative workshop into the classrooms.  In only about a week after proposing this workshop to the school I received approval from the director of Victory Academy and I got to work!

I quickly came to the realization that the previous format for this workshop needed to be modified in order for it to work at Victory Academy.  One of my assumptions with putting on this new workshop was that my biggest challenge would be working with students affected by Autism, which is a field that I am not at all trained in.  I quickly discovered that this was not a challenge in the slightest bit, in fact I found that this style of learning was perfect for the group.  The class working on this project with me was small, only 5 students, and each student had entirely unique perspectives on how to interpret the workshop prompt:

What aspect of Autism do you feel has the largest impact on your life, and how could this be turned into a superpower?

At first I was nervous about bringing up what I assumed would be a sensitive topic, but to my surprise the students were quite open and comfortable with sharing their challenges and ideas for how to reimagine them.

While the students capacities to participate in this workshop was not an issue, I was able to identify a major challenge in this new workshop right away.  The amount of time per class session and the frequency of class sessions that I was allotted by Victory Academy made it very difficult to get sufficient work done.  The class sessions are once every wednesday for thirty minutes, between 1:00 pm and 1:30 pm.  I found that it was always towards the end of the session, around 1:30 pm, when the wheels were really starting to move in the students' minds.  This has been frustrating because the students then have a full week before they work on the project again.  In that respect, this workshop has evolved into an entirely different project than the one that I taught while in India.

Looking Ahead: I have reserved a table at "Fanaticon", which is a small student run comic festival at the East Portland Community Center.  The event is on Saturday, February 13 from 10 am to 2 pm.  I have not yet told the students about the festival, but being that I just got the confirmation from the organizer of Fanaticon I will bring it up at our next class session.

11/21/2016 Update: The students have all identified the specific themes for their stories, the conflict that will arise, and the way that their characters will overcome that obstacle.  All students have at least two panels sketched out, and several students have completed all four panels.  There is no class this Wednesday because of the holiday but the plan is for all students to complete their four panels during the next workshop session 11/30/2106.
Proudly powered by Weebly