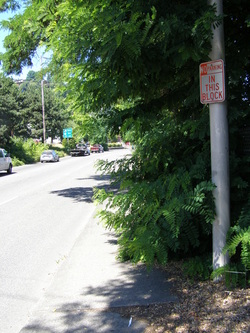 Let's start with a definition...

Rogue
noun \ˈrōg\: a man who causes trouble in a playful way
verb (used with object), rogued, ro·guing: to uproot or destroy (plants, etc., that do not conform to a desired standard).
: to perform this operation upon: to rogue a field.

My project involves the unseen hazards that surround us in our lives (Perhaps they are encased in a S.E.P field*).  It's not that they're invisible, but they're so common people will walk out into traffic rather than take a moment to make a phone call, or break/cut off a low branch which is blocking a sidewalk.  These issues are so ordinary, I've seen trails worn into the planter strips where people will walk around the low branch for so long that the branch grew to be over 6 inches in diameter by the time I found it.  I, on the other hand, simply cut it off, and in the process, reopened the sidewalk in less than 10 minutes of work.

Really, is it such an issue that really needs to be addressed?  The simple answer is yes.  All too often, we take our ability to see (or our ability to walk around an obstacle) for granted.  What if you didn't have that ability to see (or walk) then where would you be?  Just because you have these abilities today, can you be certain that you'll have it next week?  Next year?  Thirty or forty years from now?

Let's take the tree branches seen in the photo to the left.  They look small, they look easy to brush out of the way.  Until you take a closer look at them that is.  This non-native species is actually black locust.  It was introduced to Oregon by pioneers who used it for their fence posts.  It is a fast growing, reasonably strong wood that resists decay...  All good things right?  Well, it was then.  However, now it is an invasive species.  Besides the fact that the fruit of the tree is toxic, it spreads quickly, and is covered in pairs of 1/2" to 2" long hard spines that grow every few inches on the branches.  The new branches like to spread out from ground level, and left unchecked, will grow at face level.  Additionally, its roots frequently heave sidewalks up. 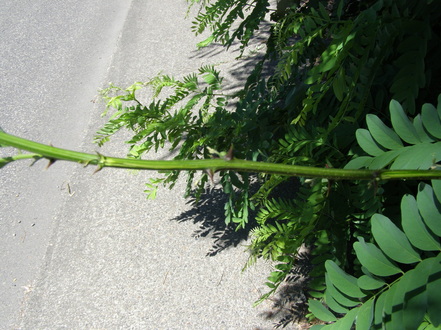 Now let's step back for a moment.  Imagine if you were a person who was legally or completely blind.  How do you find these branches?  Too often you'll find it right in your face.  Nasty scratches and puncture wounds are the result.  Even with the branches removed, the sidewalk is damaged which poses a tripping hazard that can even bring down a sighted person.  Worse yet, these fast growing trees reproduce by suckering.  Any chance they can sprout in a spot of dirt, and they will.  Those nasty spines keep sighted people away from them until they are such a nuisance that the need to be ripped out, and the sidewalks need to be replaced. 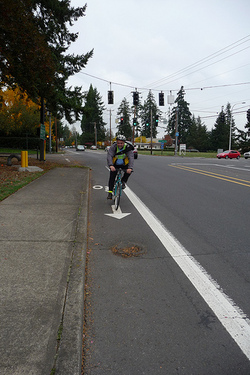 I've been told that the average storm drain grate costs $300.00.  That seems like a lot, until you compare that to what Portland paid out to a single bicyclist hurt when a poorly designed storm drain grate (which has been illegal in the state of Oregon since the 1970's**).  Gary Dunkley received $100,000.00 when he was hurt when his wheel hit a storm drain grate.  Let's divide $100,000 by 300, and whoa...  333 1/3 storm drain grates could have been replaced by that.

How about Potholes?  Oakland Califorina paid out $3.25 MILLION to Dulcey Bower when she received a traumatic brain injury following a bicycle crash caused by one?  http://www.timesheraldonline.com/news/ci_25386900/oakland-pay-cyclist-3-25-million-pothole-crash 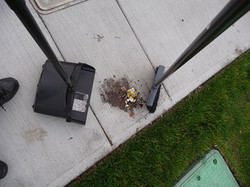 Another hazard...  glASSholes.
Not to be confused with the people who use Google's product, glASSholes are the people who deliberately toss glass bottles on sidewalks or into bike lanes, or tow truck operators who shirk their responsibility to clear crash sites of broken glass and debris.  Presuming that an individual isn't the specific target of an attack, the hazard is to people who are wearing thin soled shoes (Crocs/flip flops), pets, and bicycle tires.

The fix is to simply sweep up the mess, or report it to an agency that can. 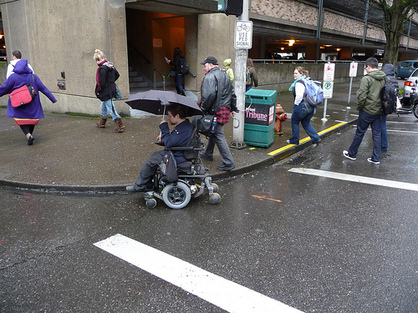 Back to sidewalks...  The Americans with Disabilities Act went into effect in 1990.  By my math, that has allowed cities (such as Portland) twenty-four years to get into compliance.  Now I admit, this image is a couple of years old now, but it shows what I found on the Portland State University Campus in February 2011.

I find it pretty pathetic that in a city as large as ours, and on a campus such as ours, issues faced by people with disabilities had been ignored by so long.  A few photos, some emails, and a phone call or two (plus a year to get it done), and things had improved greatly.  The ramp was finished in late August 2012. 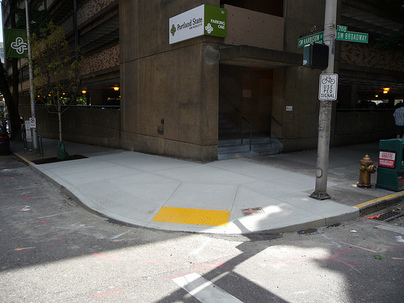 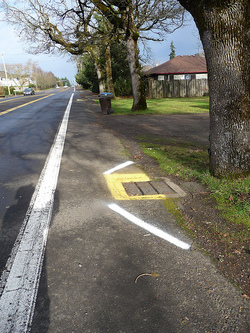 I repeatedly tried to get ODOT to fix this for a number of years, but my requests fell on deaf ears.  When I encountered again, unfixed after a number of months of repeated phone calls, and emails, I decided to take things into my own hands.  I painted it.

As I was doing my work on making this issue more visible, the adjacent homeowner came out and told me that several cyclists, joggers, and skateboarders had been hurt when they fell because of this.  Including one the week before.  I told him that if it ever happened again, to notify the victim that ODOT had been notified of this, and they should have their lawyer investigate this by contacting me.

BikePortland picked up the story, and ODOT replied quickly, not in a manner that I had expected though.  I figured that they'd "improve upon" the paint that I laid down.  They improved upon it alright.  A week after BikePortland's article, ODOT dispatched a crew, and repaved the section completely eliminating the lip that was causing the accidents. 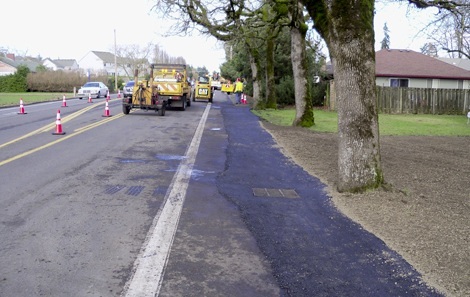 I realize that much of what I posted is older than summer 2014.  However, I was forced to curb some of my activities due to an unexpected medical reason.  As you can see, this rogue has been at it for some time.  You can be certain, I'm not planning on quitting anytime soon.

As it says in Walk Out Walk On...  Start Anywhere, Follow It Everywhere...  I'd add "and make it better as you go".

Rubberside Down (it rolls better than the skin side)
Jim

*"Somebody Else's Problem field, or SEP, is a cheap, easy, and staggeringly useful way of safely protecting something from unwanted eyes. It can run almost indefinitely on a flashlight/9 volt battery, and is able to do so because it utilizes a person's natural tendency to ignore things they don't easily accept, like, for example, aliens at a cricket match. Any object around which a S.E.P is applied will cease to be noticed, because any problems one may have understanding it (and therefore accepting its existence) become Somebody Else's. An object becomes not so much invisible as unnoticed."  - Douglas Adams.

**“Oregon Revised Statutes 810.150. Drain construction; compliance with bicycle safety requirements; guidelines.
(1) Street drains, sewer drains, storm drains and other similar openings in a roadbed over which traffic must pass that are in any portion of a public way, highway, road, street, footpath or bicycle trail that is available for use by bicycle traffic shall be designed and installed, including any modification of existing drains, with grates or covers so that bicycle traffic may pass over the drains safely and without obstruction or interference.
(2) The Department of Transportation shall adopt construction guidelines for the design of public ways in accordance with this section. Limitations on the applicability of the guidelines are established under ORS 801.030.”