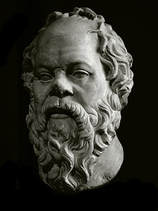 [Critical Thinking is]...the examination and test of propositions of any kind which are offered for acceptance, in order to find out whether they correspond to reality or not. The critical faculty is a product of education and training. It is a mental habit and power. It is a prime condition of human welfare that men and women should be trained in it. It is our only guarantee against delusion, deception, superstition, and misapprehension of ourselves and our earthly circumstances.
-William Graham Sumner


History:
The history of Critical Thinking consists of myriad philosophers who either deconstruct or build on the ideas of Socrates, who believed in truths that existed beyond the ostensible realities of his contemporaries. The intellectual & philosophical roots of critical thinking stem from Ancient Greece, particularly from the vision & teachings of Socrates who, 2,500 years ago, cultivated a method of probing questions called elenchus, or the Socratic method, or Socratic questioning. The only issue with the teachings of Socrates is that Socrates did not record himself his teachings. Instead, we depend on his contemporaries & especially his followers, most notably Plato, who employed a character named Socrates in his dialogues, for information on Socrates. But The Socratic method remains a commonly used tool in a wide range of discussions, & is a type of pedagogy in which a series of questions is asked not only to draw individual answers, but also to encourage fundamental insight into the issue at hand. Today, a scientific method in which a hypothesis constitutes a first step is the most prominent method that is informed by the Socratic method. One example of Socratic Questioning would be asking one’s interlocutor a series of questions to which he or she would be most likely inclined to answer yes, before asking them the ultimate yes or no question, “is the person willing to adopt a new belief?” Another example of elenchus or Socratic questioning involves asking an interlocutor a series of questions that attack the premise of his or her claim. Ultimately, the Socratic method involves asking questions that reveal a person’s underlying beliefs. Basically Socrates believed that the ancient Greeks could not rationally support or justify the strong claims to knowledge they made, nor could they support the stereotypes that informed their claims to knowledge. Socrates’ contribution to critical thinking was ethical in character, which is important. Many of his contemporaries & his governors believed he was attempting to corrupt the Athenian youth, but what he was really doing was challenging Athenian authority. Socrates had a habit of making ostensibly wise Athenians look unwise and this ultimately lead to his trial and death. Ironically Socrates was asked to propose his own punishment for his crimes & suggested a salary from the government & free dinners for the rest of his life, so as to finance the time he spent as Athens’ intellectual benefactor.
​

What Kind of Skills are Related to Critical Thinking?
The Socratic Circle Activity

is an exercise through which a class or group can workshop & explore their critical thinking skills. This term, our class sat in two groups, an inner group & an outer group. The inner group interpreted the two paintings below while the outer group documented the inner group's critical thinking skills & offered support in the form of questions. The inner group found many similarities between the two paintings, especially in regards to their tone & movement, while the outer group found that the inner group employed Critical Thinking skills such as judgment, evaluation, clarification, objectivity, problem solving, & interpretation in a specific order for specific reasons. Ultimately, the inner group made initial judgments before making more diligent evaluations, which seemed to provide a structure or foundation for the interpretation. Then they employed clarification so as to reconcile questions, any confusion, & any complications before employing objectivity so as to ground their interpretations in various methodologies or schools of thought. From there they employed problem solving so as to compose their unique ideas & interpretation skills to complete the activity & offer their critique of the two paintings. Ultimately, the exercise gave our class an opportunity to analyze the methodology with which they think critically both individually & as a group. The activity yielded not just a list of Critical Thinking skills but the order in which they were employed, which gave us a great sample from which to learn more about the way we problem solve.
Below are the two paintings: Death of Socrates by Jean Louis David & The Last Hours of Abraham Lincoln by Alonzo Chappel, followed by the Nerdwriter's How to Read a Painting: The Death of Socrates & a seating chart diagram for the Socratic Circle Activity.
​

MUDER MYSTERY ACTIVITY
For the clues and the answers click on the file below.

HOW WE USE CRITICAL THINKING IN OUR WORK