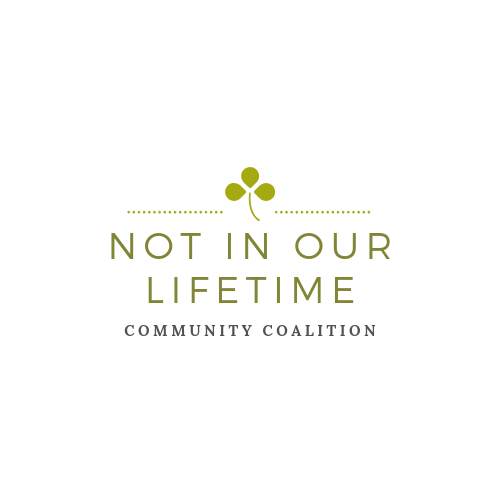 History of the ORGANIZATION

My Role in Not in our lifetime

My role as the founder of the organization meant that I had to create my goals, and implement and develop plans and due dates. I had two other community members who contributed about 15 hours of times as well as $25 dollars. The recruiting process for signatures on a document to the city required roughly 100 hours over 3 weeks, and $250 of my own money for ads and street signs, website development, google voice set up, and email domain purchasing. I gathered signatures and started a petition using the organization Moveon, and I attended City Council meetings with members of my group and spoke to a council member at their home. We received the final notice that of the appeal process 3 weeks before the ultimate approval of the project so time was a sensitivity in my efforts.

Could be described as my process. Having never done this before I followed what worked and what I felt to be right. I could best describe "feels right" by saying what invigorated me to keep going was what I did. I will lay out in detail as to what I did from day 1 until now. And it all started on the App Nextdoor.
I realized that the public comments were not being responded to by individual community members. I called the city planner in charge of the project Jana Fox, and asked her why they were not replying. Her answer, the complaints were not founded in code violations, and city planners cannot stop a development if there is not legal claims. This made me realize I had a lot of reading to do. 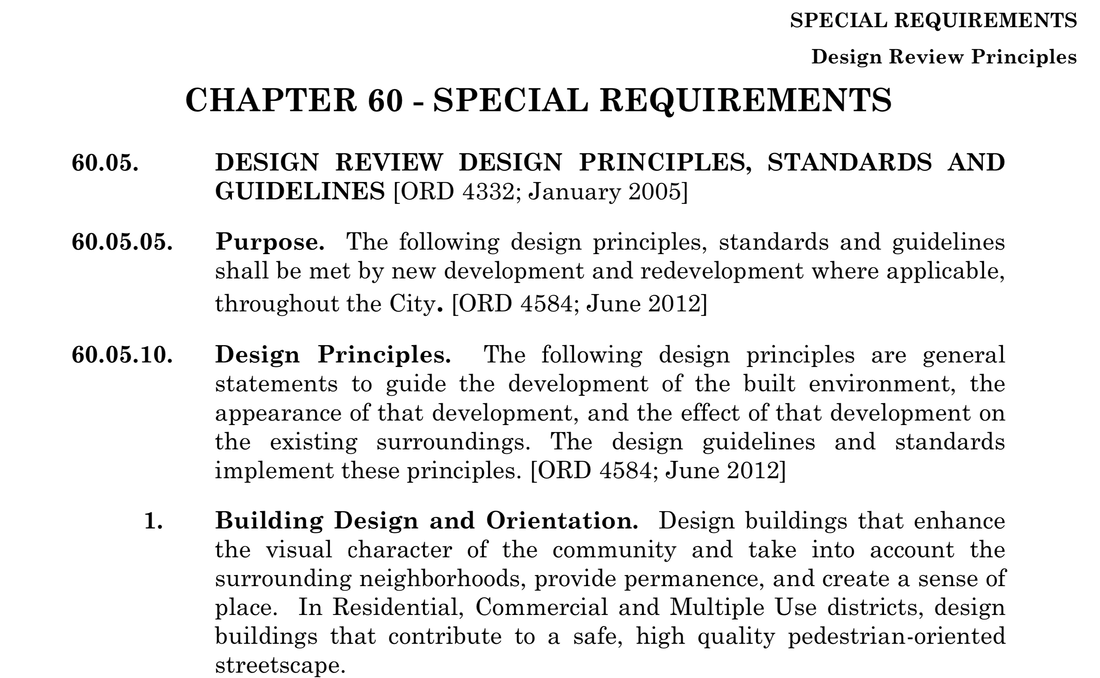 I compared the codes I thought they might be violating, and the design plans to form a document to send to the planning commission.

​I started getting a lot of hate mail, particularly from one person that wanted the gym to be put in. Finding out that he was a millionaire accused rapist made the situation a lot scarier. Eventually leading to me blocking him and telling him to never contact me again.

I developed a website using Weebly that gave information on the effects of the development on our environment. It also included a document signing widget that allowed people to request to be added to the document being sent to the city. The document included all of the signatures(105 people) and the expected code or ethical violations by the company. At this point we were all waiting to see if the lawyers for a company against the project were going to file an appeal, if they didn't our efforts would be for nothing. I called the lawyers I found on the public comment forums and told them we would show up to support the denial of the permits and showed him the documents to show their clients. They liked the idea and convinced their client that they should do an appeal (This saved us 2300 dollars) 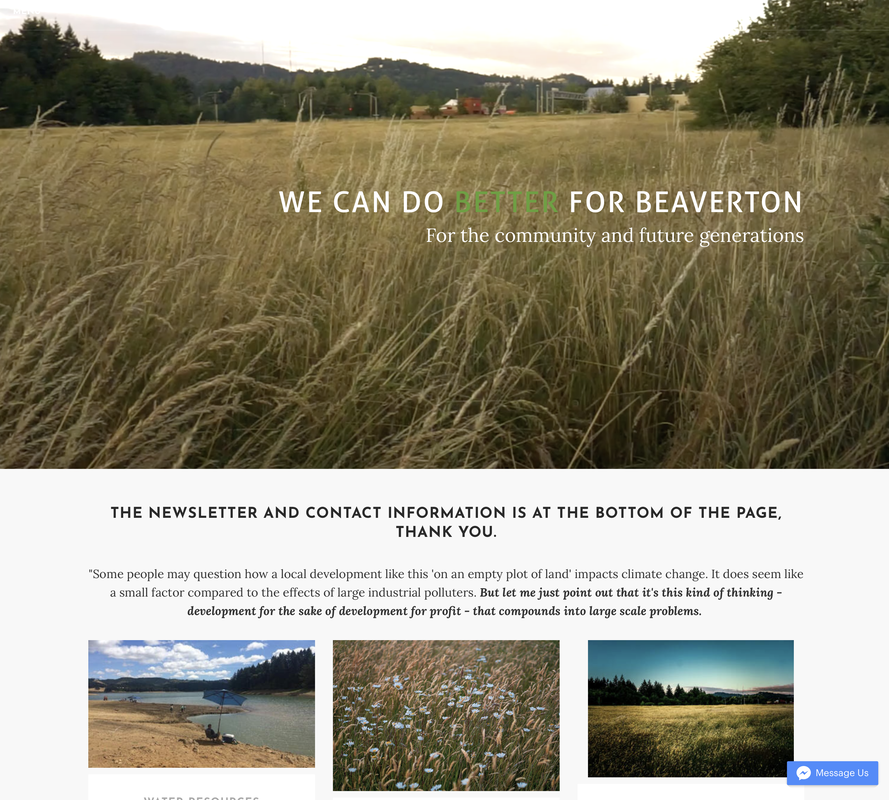 Document: I used the lawyers ORIGINAL public comment as a template to make it look professional.

I made the mistake of giving out my personal number to people want to ask questions about the development. So I made a Google Voice Account, then my email was getting swamped, so I bought the domain sustainablebeaverton@not-in-our-life.com
​This reduced my harassing calls to my personal device and emails and helped separate my work(research) from this project.

Printed Signs around the neighborhood 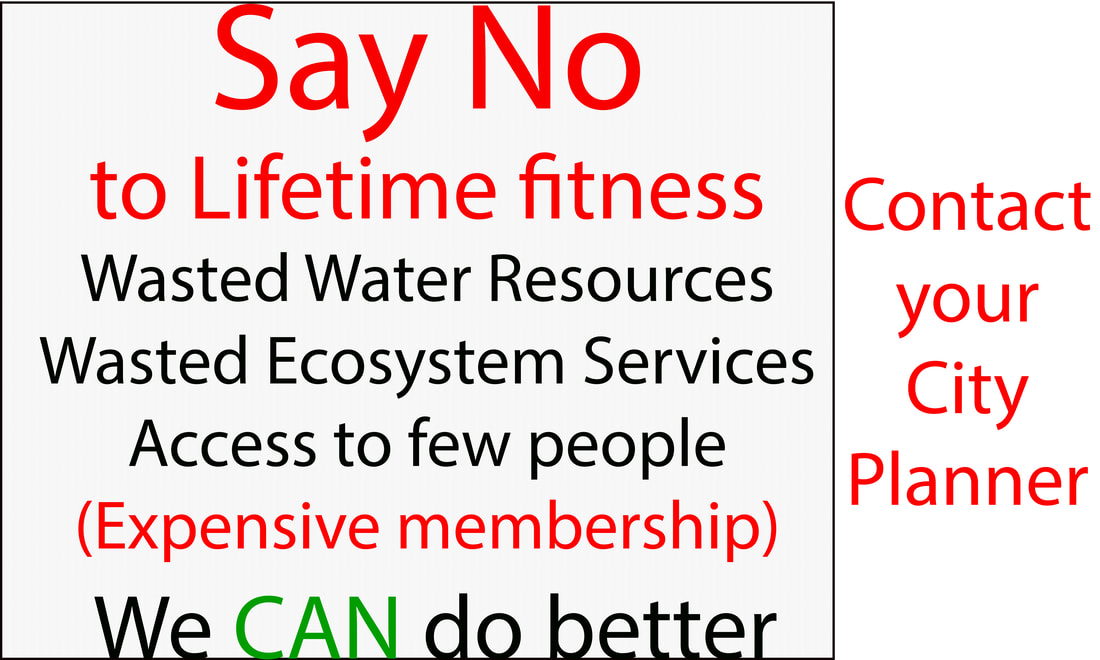 I payed 145 dollars to have signs expedited, this turned out to be the biggest waste of money because opponents stole the signs, and I wasted a lot of time talking to city officials who deal with code for advertisements, and hours riding around on my bike placing them. However, one sign survived until the very end in a very busy intersection.

Organizations I called include:
- 1000 friends of Oregon
- Beaverton Diversity and Inclusion council
- Audubon society.
- Beaverton Hispanic Center
and a few others that never called me back

None of the organizations had the resources to help, or they were not interested. 1,000 Friends of Oregon said they would partner with us in the future.

I found out that the Diversity Council does not have anything to do with developments, so they wished me the best and that was it.

I had 5 goals at this point
- Get 105 signatures
- Get 10 people to come and speak at the city council
- Speak the city Council myself
- Speak at the CPO meeting
​- Make even one change to the development.

When all was said and done the city planners used our suggestions for planting more native flora. The original plan the company only included 2 out of 28 species to be native and drought resistant. The city is now requiring them to include at least 50% native species. But all of our suggestions were shut down for being non code related.


This was all an incredibly emotional journey for me, not just because the job at hand, but in my personal life I was struggling with difficult personal obstacles. My girlfriend of 6 years moved out of our living situation to de-stress which left me lonely, I have struggled with my mental health, and I had just lost my health insurance since I turned 26. The challenges I faced compartmentalizing this project, and my personal life put me in emotional positions I had never faced before. The negativity of harassers online was compounded by feelings of inadequacy, and nihilism about climate change.

There are a number of things I would have done differently if given the chance to rewind. I would have asked more of my 2 other leaders as to give myself the vacation I was supposed to take during this time. I would not have printed the signs, as they were costly and ultimately not very effective. I would have believed in myself more and taken more time to prepare my speeches and do research on how to give better public testimony, and I would have liked to have thrown a party. Ultimately my journey was guided under the restriction of time, in the 3 weeks we had before the last hearing we grew from 1 to 105 people gained public attention and found community partners that will help us going into the future to create sustainable development. I honestly can't say if I will continue this project because I will be applying for PhD programs around the world and leaving Portland/Beaverton shortly after.

My calling is to be part of the global narrative on climate change. I want to influence those in power, and force space for those who struggle to or are not given space to speak. I don't know what I am doing, and only have a vague idea of how to get there. But eventually  I will use these skills I learned to empower others to speak for themselves, and I will eventually be using the public speaking experience I had to speak on the floor of the UN.
Proudly powered by Weebly