Empowerment Through:  workshops designed to empower through action

Do you ever wonder what it means to be empowered? Have you ever witnessed or been part of a conversation about what type of behavior "counts" as empowering? Sometimes, it's easy to imagine a type of behavior or identity as being empowering from one angle, yet oppressive from another. So what do you do when you're drawn toward participating in something controversial? When does one cross the line from expression to exploitation?

An important question to ask at this point is, "Who's doing the talking?" It is not difficult to be a passive participant in mass media. In fact, many would argue that it is more difficult to avoid being part of the conversation at all; advertisements are all over the place, and even the most staunch anti-media advocate would be hard pressed to go any significant amount of time without exposure to some mass-media-created content (think catalogs, newspapers, billboards, and even bumper stickers). But once one begins to recognize media's influence, how does one go about joining the conversation?

I had a little bit of a revelation this past February, when Bernice King came to speak at Portland State. There had been some controversy over her visit, and I was very much interested in what she would have to say - would she mention the bad press at all, and would she address her stance on gay marriage on a campus that is overwhelmingly supportive of LGBTQ community? What were her values? I was working at the event supporting the audio-visual team, and it occurred to me that I was benefitting from a woman whose politics I didn't necessarily agree with. Was I implicitly supporting an oppressive agenda by accepting those hours? Did my paycheck mean I wasn't being a good ally?

On a strictly technical basis, I was helping to give this woman a voice; in laying down cables and setting up speakers, I was amplifying her message, literally and figuratively. I agreed with most of what she actually spoke about that evening - the importance of non-violence - but even knowing her stated views on marriage equality gave me qualms about providing, in any way, an avenue for her to boost her presence. At the end of the day, we all make sacrifices. But, also, at the end of that day, I had allowed for one voice in this larger cultural conversation without also contributing my own.

Sometimes the larger philosophical question of how to contribute can seem overwhelming, at least to me. Fearing criticism is an easy way to generate inertia, and throw up your hands in despair. If I were Nicki Minaj, or Bernice King, or Lady Gaga, or any female in the media spotlight, I'd have a hard time not getting frustrated. What does it mean to be a good example? Do the ends of achieving success justify the means of playing the game?  Cue the seemingly endless debate about perceptions of prominent women.

My main focus right now in the realm of content creation is to encourage people to just do it. It doesn't have to be professional, or political, or even good - but learning how to lay down the cable, or upload the .wav files, or get used to the sound of your own recorded voice is the first step. Laying the technical foundation is key; that way, when the moment strikes and you do have something really important to say, the channels are already there for you.

I'll be setting up my very DIY recording studio at Surplus Space sometime this month (date TBA) as a part of Research Club's monthly brunch series. After giving a short talk on my own history with the project, I'll be inviting people to tell stories, or jokes, or contribute in any way to the tape that I'll be recording, and I'll post the content on the RC blog and link to it here. Stay tuned! 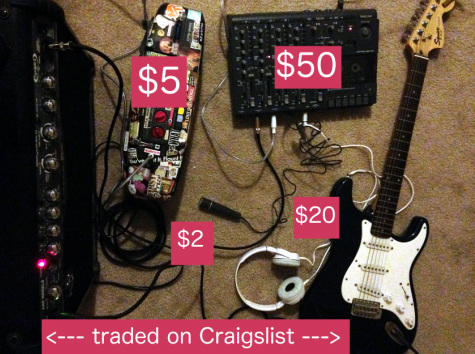