One way I have experienced diversity is from working and volunteering in the hospital. It is evident that each patient and each family had their own unique experience that brought them there, even if the diagnosis may be the same between two patients. Working with these diverse individuals and recognizing the differences and embracing them is crucial to being successful while working in the hospital. Diversity in the hospital also makes my job fun because I get to never have the same exact procedure or experience twice.

My story starts when I first came to Portland to find myself alone in this different part of the world. I came here knowing that everyone will look at me as a stranger, and I was always afraid of talking with people because I was culture shocked. However, after one year, I started to feel welcomed and I was more social with people. What helped me to adjust to this new life is seeing people who are not from the U.S. because these people made me recognize that I am in Portland where culture differences is part of everyday life, and that people enjoy having a diverse community. This made me thankful for being part of this community because I can always share my different culture and tradition.

I grew up in a very diverse neighborhood. Most of my friends were African American or Native American or from families who had recently immigrated from various places, but primarily Vietnam, Cambodia, Mexico, and India. As a kid, I was welcomed into their homes and it was very normal for me to hear multiple languages, eat dishes from all over the world, and see how family structures could be different. These experiences were incredible and allowed me to see the world in a context that is not typical for many white Americans. I saw that there is so much to the world and no one “right” way to do things.

I’ve experienced prejudice as a lesbian who also had a lesbian mom. As a kid I saw the terror my mom lived with everyday because she was a teacher and in California a law was almost passed which would have banned LGBT people from teaching. As a gay person myself, I’ve experienced people invalidating my experiences or believing that they have the right to pass judgements and laws on my relationships. Many people think it’s a choice and that therefore they have the right to approve or not approve of my life. I also have a niece who is considered disabled, but who is very able in her own unique ways. 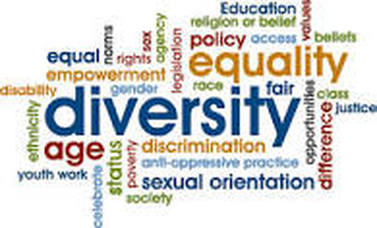 Having different views and different ways of livings is what makes us diverse. In this video the speaker talks about a situation in two different countries to show that opposite ideas can also be true.

Many people think of diversity in terms of cultural diversity, but there are many layers to diversity. It is important that diversity is not seen as people who are not white, cis, hetero, English-speaking, and typically-abled coming into "normal" spaces and diversifying them by conforming to those norms. It is important that what is seen as "normal" is turned on it's head so that all people are valued for their presence and contributions.


How Do we talk about diversity?

In the United States, it feels as though many people who have not experienced prejudice are becoming aware of the daily trials that Black, Latinx, Indigenous, LGBT, differently-abled, houseless, and many other groups experience. This awareness if vital in order for us to come together as a people and treat each other with respect and dignity and hopefully bring an end to prejudice and discrimination. In order to come together, we have to learn how to talk about diversity and prejudice in a productive way. It is important to consistently ask ourselves: does this move us forward? 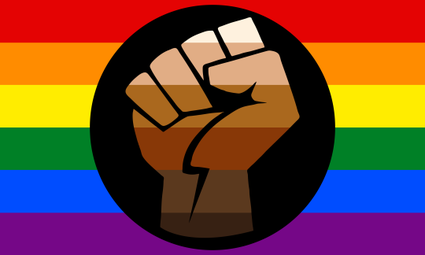 This flag was created during Pride 2017 to highlight the fact that within the LGBTQ community there is racism. Trans people, women, and people of color have historically had their voices silenced within the community, which has pushed people to cling to identity politics. The term "identity politics" was initially coined by Black lesbian feminists in the 1970's who had experienced so much exclusion from the Gay rights movement because they were lesbians and from the women's rights movement because they were Black that the women decided to create their own political organizing based on their identities. This idea has become sectarian. This flag is an attempt to raise awareness of the discrimination within the community and it symbolizes the unity that I hope to see from my community. My hope is that the LGBTQ community can come together and support one another instead of fighting in isolation. We are stronger together.

White Privilege has been an important perspective for creating awareness among white people of the horrific daily effects of racism. However, it has limitations when it comes to moving forward and tearing down the institutions that will always support racism as long as they exist. It should not be a privilege to walk the streets without harassment and/or brutalization from the cops. It should not be a privilege to have access to jobs, housing, and other very basic necessities. If we believe this is a privilege and not basic rights then we are allowing those in power to stay in power because we will attack each other instead of the institutions which are perpetuating racism. An African American socialist recently said at a conference that I attended "white people- I want more than what you have". He pointed out that speaking in terms of privilege prevents us from banding together and demanding more. White Privileged has turned into a way to shame white people who are in the struggle for liberation for all people. This shame is immobilizing and isolating. It is important to be aware of inequality and it is important for all of us to speak up for each other. It is important that we all demand equal rights for all and not just the privilege of having a skin color that keeps you safer. Again, the question at the front of our minds has to be: does this move us forward? When white privilege is used to shame and silence people who are in the struggle we are not moving forward. The emphasis is on the individual, as with identity politics, and we cannot win on an individual basis. We need to come together in collective action in order to tear down the institutions that support racism.

Intersectionality is a productive way of talking about diversity because it analyzes the ways in which oppressions intersect. When all people are aware of how oppressions intersect, we are better able to combat the systems that oppress us. For example, during the peak of the reproductive rights movement in the 70's, the voices of women of color were ignored when they brought to light that reproductive rights means the right to choose whether or not to have children. Many women of color have been sterilized throughout the years. Since this did not effect white women, that issue was not brought to the forefront. The white women ignored the material conditions that women of color faced and the movement was weakened. This is also true for the Gay rights movement which has historically excluded women and trans people. It is important that those suffer the most oppression and exploitation are at the center of movements and social justice work so that we can combat the system that created the interlocking oppressions. By understanding the intersections of oppression, we are able to better understand the oppressor and fight together for liberation for all.

Portland State has a somewhat diverse population, but are student's voices being heard? When some of the founders of Black Lives Matter visited PSU in 2016, the leaders invited a student activist who is a trans woman of color on stage and gave her the mic so that she could bring to light ways that the board and president of the university had not listened to the concerns of marginalized students. I have been in a few group discussions and heard stories from marginalized students whose needs were not being met at PSU. It's important to speak up if you feel safe and able. There are resources on campus like the Women's Resource Center, the Disability Resource Center, the Queer Resource Center, and many more where students can seek guidance on how to be heard on campus.

Below is a link to some of the campus resources with information of centers which can help with advocating for change at the university.

1. What can PSU do better to enhance diversity and inclusion?

2. What can students do to make PSU a place where all voices are heard?

3. Have you or someone you know experienced discrimination on campus?

4. What does PSU do well when it comes to diversity and inclusion? 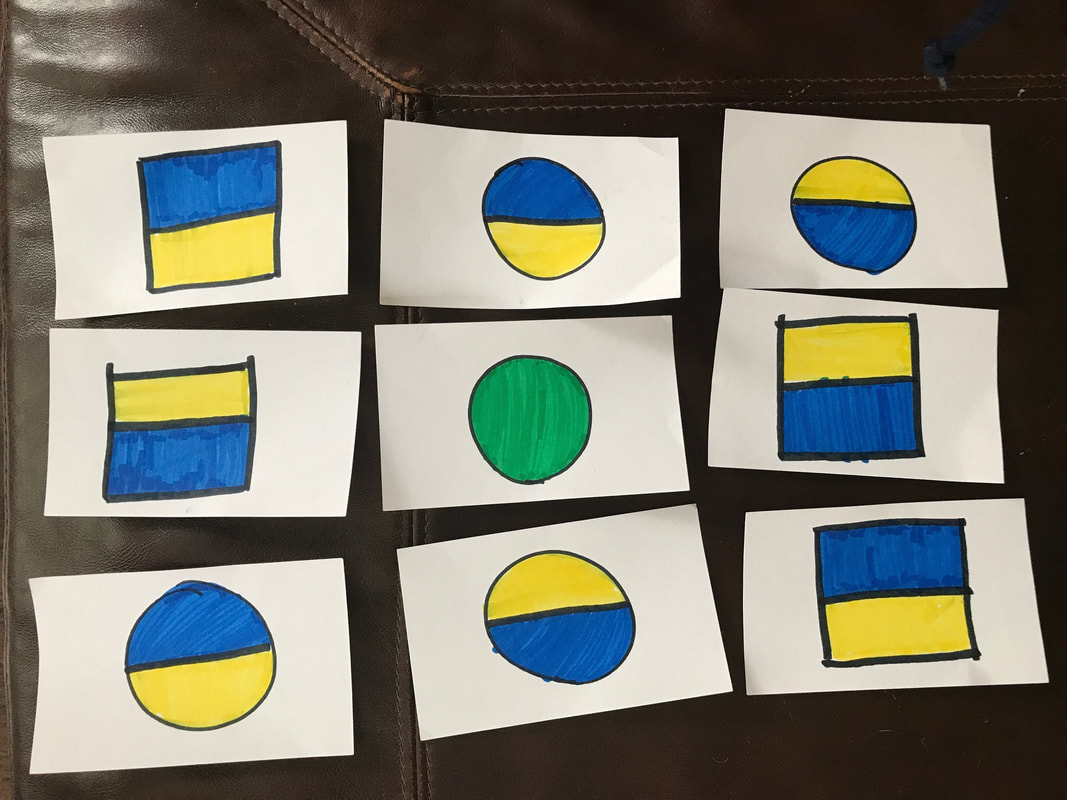 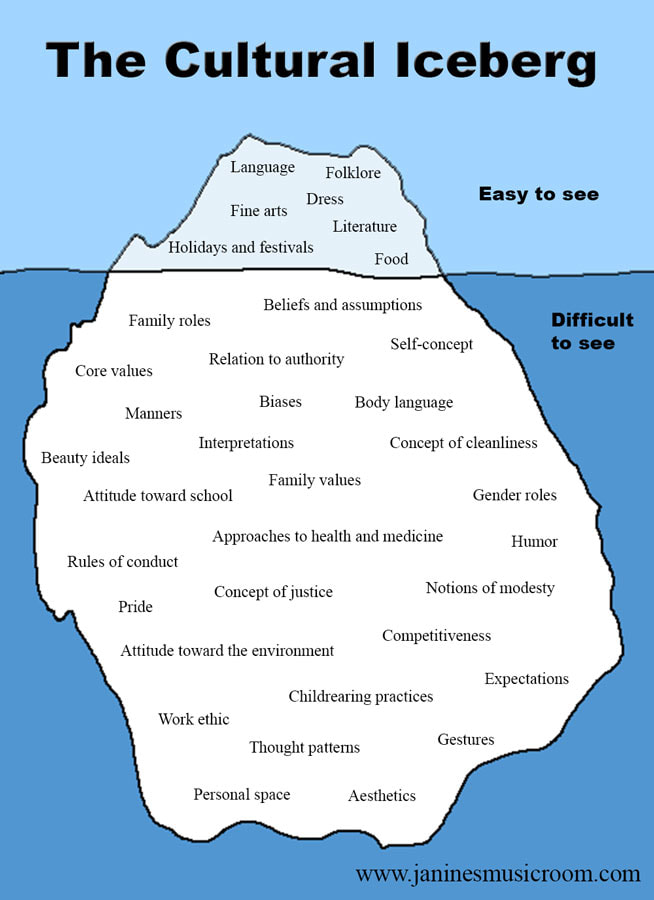